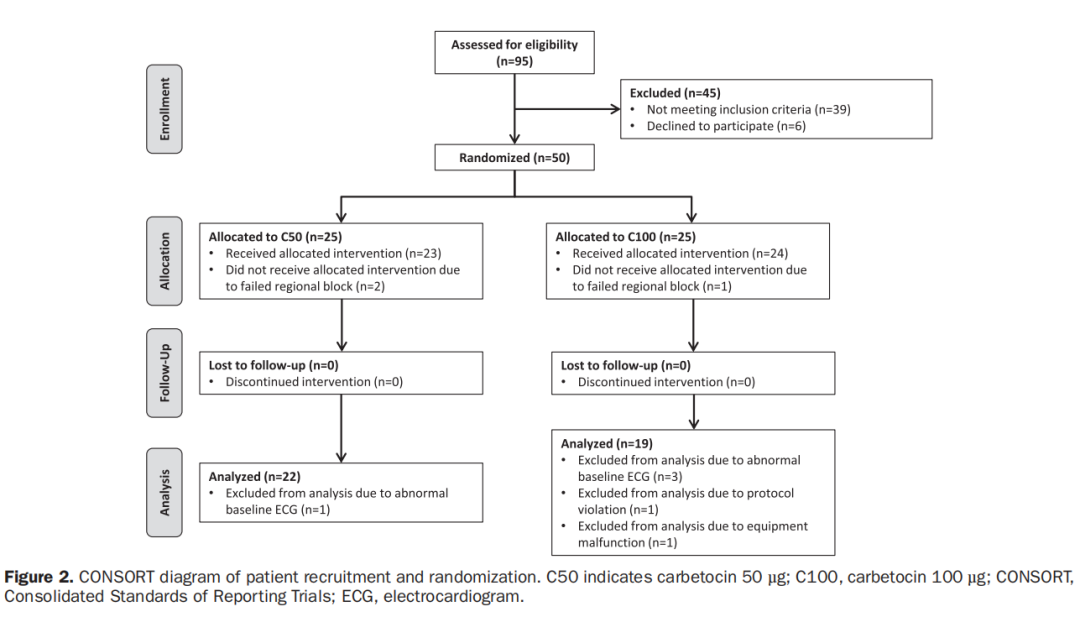 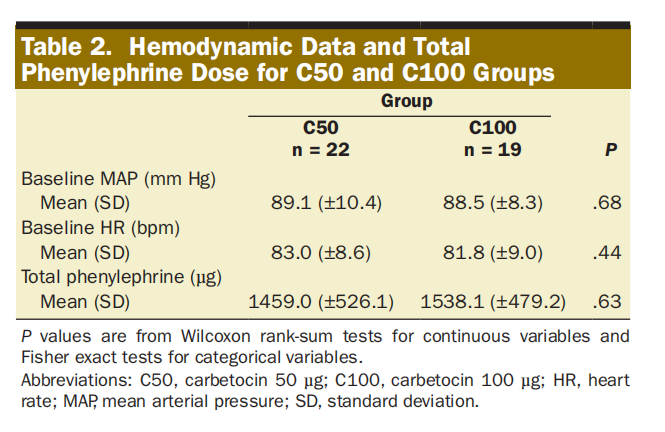 Background: QT interval prolongation is associated with torsade de pointes but remains a poor predictor of drug torsadogenicity. Increased transmural dispersion of myocardial repolarization (TDR), measured as the time interval between the peak and end of the T wave (Tp-e), is a more reliable predictor. Carbetocin is recommended as an uterotonic in patients undergoing cesarean delivery (CD), but its effect on Tp-e is unknown. We evaluated the effect of carbetocin dose on Tp-e and Bazett-corrected QT intervals (QTc) during elective CD under spinal anesthesia.

Methods: On patient consent, 50 healthy parturients undergoing elective CD with a standardized spinal anesthetic and phenylephrine infusion were randomized to receive an intravenous (IV) bolus of carbetocin 50 µg (C50) or 100 µg (C100) via an infusion pump over 1 minute. A 12-lead electrocardiogram (ECG) was obtained at baseline, 5 minutes after spinal anesthesia, then 5 and 10 minutes after carbetocin administration. A cardiologist blinded to group and timing of ECGs measured QTc and Tp-e using Emori’s criteria. Primary outcome was the change in Tp-e at 5 minutes after carbetocin administration between the C50 and C100 groups and within each group compared to baseline values. Secondary outcomes included occurrence of arrhythmias, changes in QTc at 5 and 10 minutes after carbetocin, changes in both QTc and Tp-e after spinal anesthesia compared to baseline between and within groups.

Conclusions:Tp-e was unaffected by C50 IV given after CD in healthy parturients under spinal anesthesia, but minimally prolonged by C100. The increase in QTc after carbetocin administration was statistically significant, but with no apparent dose-dependent effect. The minimal Tp-e prolongation at the higher dose is unlikely to have any clinically significant impact on TDR and therefore the risk of inducing torsade de pointes is low.